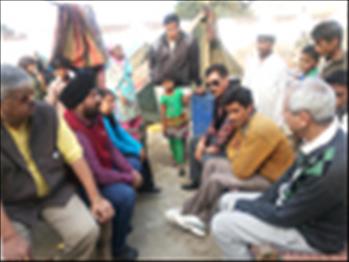 An IDPD peace team visited Muzaffarnagar on 24th November 2013. The team went to Shahpur town, Kutba, Kutbi and Kankra villages which were hit by the violence over two and half months ago. The team also visited the make shift camps for the displaced people of the area. The team comprised of Dr Arun Mitra – National General Secretary, Dr Sudhir Dhakre – National Secretary, Dr Sanjeev Verma – UP State Secretary and Dr Neelam – Member Central Council of IDPD. Dr Kuldeep Singh Chauhan a leading physician organized the visit. Social activist Com. Rambal Tyagi joined us in our visit to different places. The members interacted with the people of the area and found that until this event there had been no tension in the society. The area was spared of riots even in 1947. The rural areas had even stronger relationship among the communities. This was a result of long standing harmony, brotherhood and cohesive relationship among different communities. The events are a clear pointer to that the whole thing was stage planned, managed, and engineered in a well orgnaised manner. The role of the administration in curbing the violence has been disgusting. An ordinary crime of stalking and eve teasing was turned into communal problem. It was very sad to note that the same people who lived together are now garnering mistrust among each other. Fear loomed large among the displaced people who were reluctant to go back to their homes in the villages. Women and children were even getting nightmares. The confidence building measures are far from sufficient. The team has following recommendations to make: