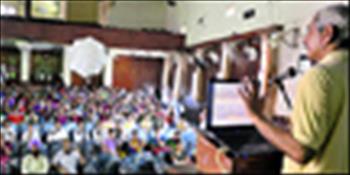 Dr Arun Mittra General Secretary IDPD informed how we can build a secured future through peace and health. He also stressed that like all industries, the thermal generation of electricity produced waste. Whatever fuel was used, these wastes must be managed in ways to safeguard human health. He also discussed about the world’s worst nuclear disaster occurred few years back. Renewable energy sources such as hydro and wind were expected to be capable of supplying energy to the human world for another one billion years at which point the predicted increase in heat from the sun was expected to make the surface of the earth to hot for water to exist. He was addressing the faculty and the students on the occasion of installation ceremony of a science society which was organised on the premises of the Government College for Girls on 3rd September 2013. He was the chief guest on the occasion. Principal Gurminder Kaur said science society was working hard to improve the standards of science wing. Atomic energy was dangerous and we should totally ban this energy throughout the world for our betterment. The meeting was coordinated by Dr Manu HOD Botany and Sh.Amrit Pal Singh.