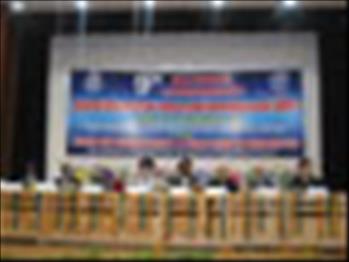 The 9th national conference for the Indian Doctors for Peace and Development (IDPD) attended by 376 doctors, medical students and concerned citizens, held at Ludhiana from 15th to 17th February 2013 concluded with a decision to prepare CITIZENS CHARTER ON HEALTH and launch campaign for a comprehensive health care to all. Wastage of resources on arms race coupled with faulty health policy and inequity in society is the cause for poor health indicators in our country. The charter will deal with resource generation by diverting expenditure from arms race and increase the government’s spending on health from 1.9% to 6% so as to meet the goal of health care to all as enshrined in the Alma Ata Declaration. For this the IDPD will intensify the campaign to abolish nuclear weapons (ICAN), build confidence among nations so as to reduce substantially the expenditure on arms race and utilize the resources in an equitable manner so that the people of the country get quality health care irrespective of their socio economic status.

The conference started on 15th February with a HEALTH THROUGH PEACE march through the main markets of the town in which over 300 doctors, students, nurses and concerned citizens including women organisations, trade unions, youth organisations bankers and ex servicemen spread the message of nonviolence and end to the arms race. Students performed Target X where they spoke to the people around on the motive and distributed literature and held rallies at various points. The marchers carried placards and banners demanding complete abolition of nuclear weapons, stop arms race & use of small arms, end to violence against women, and for comprehensive health care to all. The march was led by Dr L S Chawla-President IDPD, Dr Arun Mitra- General Secretary, Dr Bharti Uppal- finance Secretary, Dr V Sadanandam – member central council, Dr Manoj Sobti-President IMA Punjab, Dr Kulwant Singh-Joint Secretary IMA Punjab, Dr P S Jassal, Dr Narjit Kaur and Maj. Gen.(Retd) Vinod Saighal and Dr Tim Wright from ICAN Australia. Various speakers addressing the gathering said that peace is essential prerequisite for the development as huge amount of resources are wasted on the arms race. Ironically, India and Pakistan which are one among the lowest in the human development index are the biggest buyers of the arms. The upcoming congress will debate on the issue for next two days and chalk out a strategy for action for changes in government’s policy framework so as to ensure quality health care to all citizens of our country which is a constitutional right of all the citizens. The student activity day was beautifully concluded with a message balloon release by the all the participants of the march.

Medical students’ session was held on 16th February for noon in which students from several states participated in the deliberations. They organized a seminar, extempore speech competition, poster competition and signature campaign. The students expessed their opinion on the ongoing nuclear arms race, nuclear energy for power generation, tension in south Asia, poor health care delivery system in the country and violence against women and children.

The conference was formally inaugurated by the Mayor of Ludhiana S. Harcharan Singh Golwaria . He expressed full solidarity with the movement for the abolition of nuclear weapons as launched by the doctors and medical students under the banner of IDPD. Nuclear weapons are the weapons of mass destruction and have to be abolished for good, he said and assured of joiing the Mayors for peace in their endeavour for a nuclear weapon free world. The inaugural session was addressed among others by Dr L S Chawla-President, Dr Daljeet Singh-Principal DMC, and Dr Manoj Sobti-President IMA Punjab. Dr Arun Mitra gave an over view of the activities of the organization since the last conference held at Agra January 2010.

The afternoon session was devoted to Challenges of Public Health in India. Dr Imrana Qadeer from centre of social development studies, Dr Tejbir Singh- HOD Community medicine Govt. Medical College Amritsar and Dr Shakeel Ur Rahman from Patna were the key speakers. They said that spending on health has to be increased to a minimum of 6% if health of people has to be improved. Present policies of the govt. of corporatization of health care are not sustainable as majority of the people are unable to afford it. Every year 4 crore people go below poverty line because of out of pocket expenditure on health. The session was followed by discussion in which large number of participants participated. Final session was on the need for peace for industrial and economic growth.

Sh. Manoj Singhal, Chairman and MD, M&M Auto Industries shared his experience on the subject and said that economic growth is directly related to peace and disarmament.

Maj. Gen. (Retd) Vinod Saighal was the main speaker in the session on Peaceful Coexistence in South Asia. He emphasized on the need for people’s movements in the countries of South Asia so as to impress upon the governments to continue dialogue to ease tension in the region and put an end to arms race. There is need to have restraint on the provocative actions by any of the neighbouring countries. Any hasty response could flare up tension.

Professor Arjun Dev, former head department of Social Sciences NCERT and presently working on a project of the Indian Council for Historical Research (ICHR), TOWARDS FREEDOM, expressed concern at the trends of increasing intolerance in the society particularly against the marginalized sections. Such a situation is a threat to the basic fabric of the society. We must unite to combat the designs of communal, caste and parochial forces.

Mrs Amarjeet Kaur, national secretary All India trade union congress (AITUC), cautioned against the increasing violence against women. This is a result of Increasing disparity and commercialization where women are commodified and used to project the sale of the products. The recent reaction to such violence is a positive step and has to be continued. Value based education has to be given to the children in the family at educational institutes.

Video conference was held with Dr.Tilman Ruff – Co President IPPNW. He gave account of the upcoming NGO conference in Oslo.

The 9th national conference of Indian Doctors for Peace and Development (IDPD) concluded today with a resolve to continue struggle for end to violence of all kinds and to bring about conceptual changes in the health policy so as to achieve the goal of comprehensive health care to all.

The conference elected a central council. Dr L.S Chawla was re-elected as president, Dr Arun Mitra as general secretary. THe Conference unanimously authorised the president to form Central Council for the coming period.

The conference passed resolutions for abolition of nuclear weapons, restriction on issuing of small arms to the civilians and comprehensive security to be provided by the state. In another resolution the conference demanded the use of renewable energy recourses and not nuclear power for electricity generation. Conference also cautioned against the use of GM crops without proper trials. Finally the conference demanded increase in the budget allocation for health to 6% and ensure food security to all.