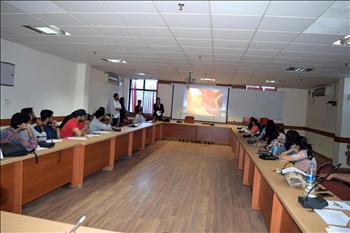 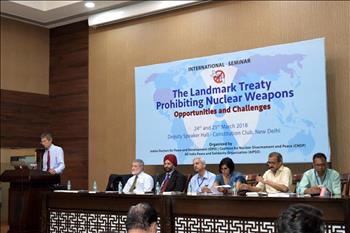 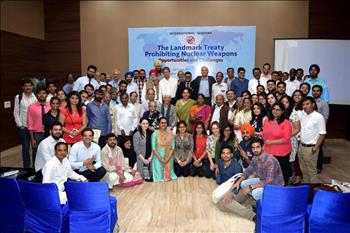 An International Seminar titled THE LANDMARK TREATY PROHIBITING BUCLEAR WEAPONS- OPPORTUNITIES AND CHALLENGES was held at New Delhi on 24th and 25th March 2018. It was organized jointly by Indian Doctors for Peace and Development (IDPD), Coalition For Nuclear Disarmament & Peace (CNDP) and All India Peace and Solidarity Organisation (AIPSO).  The world witnessed an historic event of passage of Treaty Prohibiting Nuclear Weapons (TPNW) by the UN General Assembly on July 7th 2017 with a margin of 122 vs one vote. That it happened despite tremendous pressure from  nuclear weapon countries, particularly the P5 countries is a big achievement. Unfortunately none of the nuclear weapons possessing countries including the US, Russia, France, UK, China, Israel, Pakistan India and North Korea participated in the deliberations. It therefore has become a challenge that these countries should be made to join the treaty through public campaigns & opinion building and  lobbying with the decision makers. The seminar was held as first such activity in a nuclear weapons possessing country with a resolve to hold such activities in other countries who have these weapons of mass destruction.

Dr Tilman  Alfred Ruff from Australia who is the founding chair of ICAN, Dr Ira Helfand member International Steering Group of ICAN, both Co- Presidents of International Physicians for the Prevention of Nuclear War (IPPNW) were the key speakers. Dr Tilman Ruff gave a detailed account of the formation of ICAN as a larger campaign of several organisations working for nuclear disarmament. Right from conceptualization of idea by Dr Ron McCoy, former President of IPPNW in 2006 and formal formation of  ICAN in 2007 it has been a long drawn process with Australian group playing key role in it. The central point of the campaign has been Humanitarian Impact of Nuclear Weapons, Dr Ruff said. It was a hard task lobbying with several countries and to convince them to vote for the treaty despite all sorts of pressures. Dr Ira Helfand gave details of climatic consequences of nuclear war and explained how the effects could be catastrophic and put over two billion people at risk even if there was a limited nuclear exchange. He further said that a larger nuclear exchange between US and Russia could be end of modern civilization.

Dr S S Soodan – President IDPD lauded the efforts of ICAN in reaching the treaty at the UN and called for a similar broad movement in South Asia.

Addressing in the session on Global Nuclear situation-New Vistas Ahead, Maj. Gen. (Retd.) Vinod Saighal cautioned that we are losing time. Ironically nuclear weapons possessing countries are not learning lesson. The seminar, he said is at a right time and in right direction. Such activities need to be followed up consistently. Achin Vanaik, founder member Coalition for Disarmament and Peace (CNDP) in a very articulate manner explained how India is being brought in the trap as US ally to fight against China. India has for last few years has lost its basic tenets of peace. Continued conflicts in different parts of the globe could at any time trigger nuclear conflict. Prabir Purkastha, Vice President AIPSO explained how the prospects of nuclear disarmament in the near future are low because the NWSs are not going to join the TPNW. Struggle however has to continue, he said. Dr Satyajit Kumar Singh – Senior Vice President IDPD said that there should be easy flow of people from one country to other in South Asia. Kelvin Kilbet and Franca Bruggen – The International Student Representatives of IPPNW highlighted the need for involvement of youth in the peace movement.

Speaking in the session on Nuclear Danger in South Asia – Reality and Opportunities, Ms.Lalita Ramdass a social activist stressed on the need for mass movement against the nuclear designs and for this to increase work at the ground level. Shri S P Uday Kumar a leading activist of anti nuclear movement said that nuclear energy is being thrust on our country despite the fact that it is proved to be harmful and hazardous. Those opposing the nuclear energy are being charged as anti national and seditious. Shri Suvrat Raju a theoretical physicist at the International  Centre for Theoretical Sciences of the Tata Institute of Fundamental Research cautioned about ongoing machinations to build nuclear weapons in our  country. Dr Bansidhar Mishra – Former Health Minister and leader of Physicians for Social Responsibility (PSR) Nepal said that cooperation among SAARC countries must increase and South Asia be declared as nuclear weapon free zone. It is the smaller countries who suffer the most in the situation of war and violence. Dr G M Malik – Vice President IDPD said that it is important to resolve the issues in Kashmir for a lasting peace as the strife situation is adversely affecting the development of the state.

In the session of Social Dimensions of Nuclearism Dr Imrana Quadeer – Former Professor of Public Health in Jawahar Lal Nehru University warned about  decreasing public health expenditure and increase in the military budget worldwide. The WHO has lately started promoting individual responsibility over social responsibility for health. Ms.Kamla Bhasin a vociferous women activist said that in any event of war and violence women and children are maximum affected. Toxic and hegemonic masculinity is the root cause of violence. India has lost respect because of nuclear posture. Ms.Reetika Khera Associate Professor (Economics) at the Department of Humanities and Social Sciences, Indian Institute of Technology Delhi, wanted that only the arms industry gets benefitted from the war rhetoric. She wanted military spending to be brought under Right to Information Act. Ms.Seema Mustafa a leading media personality presented dismal picture of the media which is by and large under the control of corporate sector. The journalists, even the editors are losing their decision making power and have to go by the diktats of the owners of the media under the pressure of the government. Some journalists create war like situation sitting in the studio rooms by talking of hatred and narrow nationalism. They pose war not at dangerous but as something sexy. New information order has to be developed. Dr Sanjay Nagral a gastro surgeon and activist for the promotion of medical ethics said that nuclearism has to be linked with healthcare because of its wasteful expenditure. It is unfortunate that some doctors have forgotten their ethical duty and support nationalism and jingoism. Dr Ravindra Nath – Secretary IDPD said that right to live in dignity should be the fundamental right which is denied in the events of war and violence. Dr Rajani – Secretary IDPD wanted the movement to be spread throughout the region.

Shri Aziz Pasha – Former MP wanted the issues to be taken up with the members of parliament. Dr Tarun Mandal – Former MP said that it is unfortunate that most of the present parliamentarians are not sensitized over the issue. Shri Mani Shankar Aiyar – Former Minister warned about the growing nationalism and seeing the nuclear weapons as strength rather than something to be scorned. It is a dangerous trend that the present government in particular is promoting nuclearism to garner to political advantage without realizing the dangers.

Discussing the strategy in the session on Prescription for Peace Dr N S Bawa – Vice President IDPD called for a joint effort and put pressure on the politicians to make VISA free South Asia. Dr Jeetendra Singh – Secretary IDPD said that there cannot be any complacency in the struggle for peace. Dr Anindya Shams student representative from PSR Bangladesh laid importance on the united struggle by the young doctors and medical students of South Asian Countries. Dr Bimal Khadka former ISR said that medical students around the globe need to be sensitized on the issue of peace and disarmament. Dr Gagandeep Singh – student coordinator IDPD called upon the students to come forward to save the life. Dr Yudhisthir Dass – Secretary IDPD called for wider movement for peace. Dr Anjali Mehta said that we should demand to end war frenzy and try to make disarmament an issue in the upcoming general election next year. Dr Aneesh Maini – National Student Representative IDPD asked the students and young doctors to be connected with the peace movement. Several students and young doctors participated in the deliberations. Dr Dharmendra Kumar from Rajasthan participated in the event.

Dr Shakeel Ur Rahman – General Secretary IDPD who compeered the proceedings of the seminar said that IDPD will plan online petition to the MPs and hold a big event on 1st July 2018, the Doctors Day.

Dr Arun Mitra – Co President IPPNW outlined the programme to meet the decision makers but expressed anguish that none of the President, Prime Minister, Foreign Minister and Defense Minister cared to give appointment to the leading representatives of ICAN, the Nobel Laureate organization 2017.

It was planned to have meetings with the decision makers in other South Asian countries to request them to ratify the treaty in their parliaments soon.

It is unfortunate that the Dialogue with Decision Makers could not happen because of cold shoulder attitude of the Indian government. Even the Chairman of the Parliamentary Standing Committee of Defense Maj. Gen.(Retd.)B.C.Khanduri who had given appointment to the international delegation on 26th March and  confirmed it in the morning, backed out of it merely 1.30 hours after that.