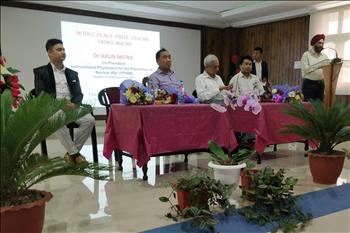 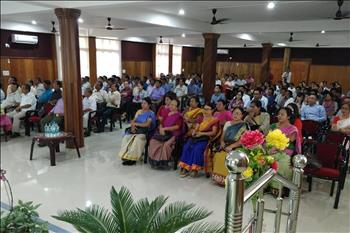 The Indian Delegates who have been to Oslo, Norway on 10th and 11th Dec'17 to witness the Official Nobel Peace Prize Ceremony 2017 as a part of the Nobel Peace Prize winning Team have been felicitated at Jivan,Hospital, kakching in Manipur, India on 26th May'18.

Acknowledging the landmark treaty, TPNW(Treaty for prevention of Nuclear Weapons) and the remarkable achievement of ICAN for its contribution in bringing out the treaty, the Indian Delegates expressed their strong support and appeal to continue the campaign till the Nuclear Weapons are completely dismantled by the Nuclear possessing countries and the world is free from the threat if Nuclear weapons.

The reception programme which was attended by a large number of intellectuals and supporters of the the Peace movement, concluded by breathtaking Manipuri cultural shows including Manipuri Martial Arts among others under the theme,"Culture For Peace".

On 27th May'18, a GBM, General Body Meeting of IDPD, Manipur state chapter was held at the conference hall of Babina Diagnostics, Imphal, Manipur. The meeting was held in presence of Dr. Arun Mitra(Co-president, IPPNW), Dr. S.S Soodan(National president, IDPD), Dr. M. Nara Singh(President,IDPD manipur chapter and Former Minister, Govt. of Manipur) among many other doctors. In the meeting new office bearers of Manipur state chapter were elected- a total of 30 members gave their consent to be the members and work for IDPD out of which 12 senior doctors were further proposed and accepted unanimously to work as executive members.Dr. M. Nara Singh as the President, Manipur chapter, Dr. Ksh Chourjit Singh and Dr Y. Mohen singh as Vice President,Dr. Ksh Manglem Singh as the state secretary, Dr. Angouba as media Co ordinator and Dr. N. Sadana as treasurer were also elected by the members. The GBM was followed by a press conference in which Dr. Arun Mitra, Dr. S.S Soodan and  Dr. M. Nara Singh mentioned  about the need of TPNW, Treaty for  Prevention of Nuclear Weapons and also expressed IDPD/ IPPNW's concern about the existing tension among various neighbouring countries in different parts of the world and appealed to all sections of people to join the peace movement for a safe and secure future of all.