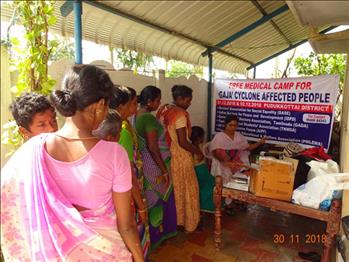 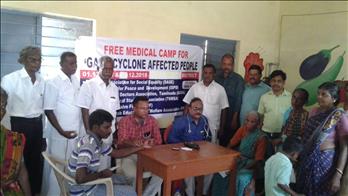 IDPD conducted medical camps and provided relief materials to the people affected by the Gaja cyclone.

In Mannakudi near subramaniyapuram of Pudukkottai district a medical camp was held on 2.12.18.Dr.G.R.Ravindranath, Dr.Dhatchinamurthy,Dr.Manimaran, Dr.Umamaheshwari  and medical students of Thanjavur medical college under the leadership Hari Ganesh participated in the camp.

A medical camp was held on 1.12.18 at L.N.Puram, Aranthangi of Pudukkottai district.

Dr.A.R.Shanthi and Dr.G.R.Ravindranath participated in the camp.Free sugar test was done for more than 50 people by Paramedical lab educational and welfare Association.

A medical camp was held at Nainankollai near Aalangudi of Pudukkottai district on 1.12.18.IDPD and Doctors' Association for Social Equality organised the camp.More than 300 people benefited from the camp and free sugar tests were also conducted by para medical lab educational and welfare Association.