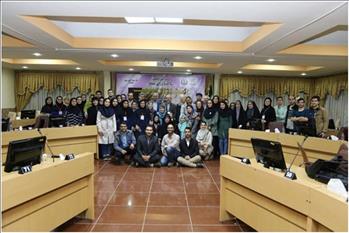 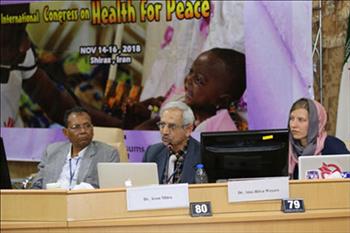 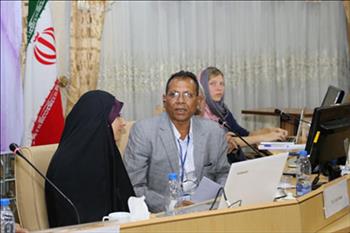 The International Congress on Health for Peace was held in Shiraz from 14-16 November 2018 and hosted by Shiraz University of Medical Sciences.

The Congressional Policy Committee, chaired by Dr. Malekzadeh, Deputy Director of Research and Technology, was the Minister of Health and Medical Education, and at the Ministry of Health, from about six months before the congress, organized regular monthly meetings to examine the various aspects of congressional issues. Compilation of indices and design of various congressional panels. The meeting was attended by bosses and panel administrators, the Presidency of the Congress, the scientific and executive secretary of the Congress, and representatives of international organizations such as the World Health Organization, the Red Cross, UNICEF, UNESCO, the Red Crescent Society and the IPPNW Nuclear Warfare Association.

The Peace Museum of Tehran, as the headquarters of the Iranian Representative of the IRPSR (Iranian Social Responsibility Doctors) Corps, was well-respected at the Congress, supporting the invitation of foreign guests from 4 different countries (Sweden, Germany, England and India) to the presence of guests and foreign professors in the congress has been of great help.

The Veterans Institute of Engineering and Medical Sciences also had a strong presence at the Congress by organizing a panel on the health problems of Iranians and also by inviting foreign guests to work with the Peace Museum of Tehran.

Fars Provincial Governorate, Shiraz Governorate and Municipality and Cultural Heritage and Tourism Organization of Fars province, with their material and spiritual support, helped to organize this congress as well.

The program of the panels held at the Congress is attached to the report.

The guests invited by the Institute of Veterans of Engineers and Medical Sciences of Veterans and the Peace Museum of Tehran were:

1- Dr. Gunnar Westberg, chairman of the SLMK and retired members of the board of directors of the IPPNW

2. Dr. Rebecca Johnson is responsible for the ICAN Financial Committee, members of MEDACT in the United Kingdom and international peace activists.

5. Dr. Katja Goebbels, Member of the Board of the German IPPNW Board

6. Dr. Aino from the board of ICAN Germany

From this list, the second guest, namely, Dr. Johnson, did not receive a visa at the right time and did not attend the congress.

The Iran-Iran Health Impact Panel, which was conducted by the Veterans' Engineering and Veterinary Research Institute, was accompanied by the presence of chemical victims and greatly influenced the screening of documentaries from the severe chemical injury victims.

On the last day of the congress, a joint panel was held with the presence of the representative of Ayatollah Khamenei in Shiraz, a group of religious scholars and medical ethics, and read the message of Dr. MohaqeqDamad of Iran's great jurisprudents and university professors in the field of jurisprudence and ethics. Reviewing the opinions and opinions of religious jurists in the field of peace and medical ethics.

The noon of November 16, with the presence of Dr. Malekzadeh, the Deputy Minister and Head of the Health Research Center of the Ministry of Health and Medical Education, was held at the closing ceremony of Congress, and ended with a final statement by the secretary-general of the Congress of International Contracts.

The final statement is attached.