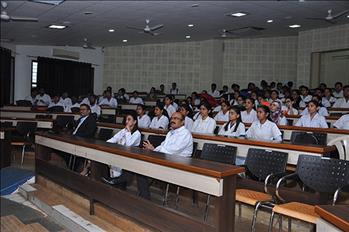 Round Table Meet on Rising Costs of Life Saving Medicines  Is there a limit ?

A round table meet on Rising Costs of Life Saving Medicines – Is there a limit ? was held at Crest Club Gurgaon on 12th February 2019 organised by Straight Drive. The meeting was attended by people from medical profession, law, pharmaceutical industry, corporate hospitals, small scale sector hospital representatives. Shri Mukund Trivedi introduced the subject as a concern for the health of the people who cannot afford such expensive treatment particularly the high cost of drugs. The session was moderated by Shri Pawan Choudary . Shri Jayant Kumar, Father of the girl who had died at Fortis Hospital two years back with Dengue fever, narrated the  sorry tale of affairs at the corporate hospital where  he was billed Rs.17 Lakh. The details of the bill showed exorbitant charges on the consumables. Different viewpoints were expressed on the cost cutting of medical treatment. Whereas the representatives from the corporate hospitals put forward their views of high expenditure in maintenance of the facility. Dr Arun Mitra highlighted the failure of successive governments in taking care of the health of the people and shying away their responsibility to provide healthcare to its citizens despite being signatory to the Alma Ata declaration. He said that the patent rights under the WTO regime deny the companies in our country from producing cheap bulk drugs. But the government should use the flexibility clause to give license to manufacture by declaring national health emergency. He said that the companies recover the cost on R & D  in almost two years therefore the product patent rights for 20 years serves only the developed countries. He suggested following points for bringing down the drug prices:

It was decided to hold similar activities from time to time and make the public aware of their rights.