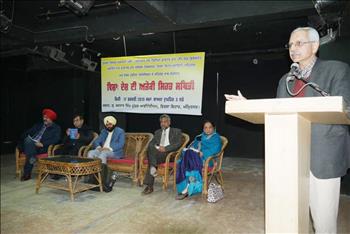 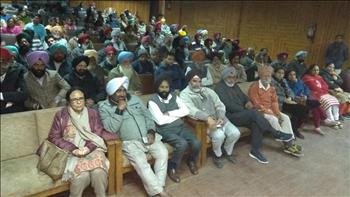 Seminar on “Present Health Scenario in India”  at Amritsar

A seminar on “Present Health Scenario in India” held at Amritsar on 17th February 2019 at Virsa Vihar demanded Health to be declared as Fundamental Right. Pushing the health to the private sector outright will further marginalize the already deprived section. Government should fulfill its responsibility to give healthcare to all. The seminar was organized jointly by the Indian Doctors for Peace and Development (IDPD), Folklore Research Academy, Virsa Vihar Society, Social Medicine Association and Alliance of Doctors for Ethical Healthcare (ADEH). Addressing the seminar Dr Tejbir Singh, Vice President IDPD and former Principal Govt. Medical College Amritsar said that  even though India is signatory to the Alma Ata Declaration, but it has failed to take steps for Healthcare to all. Successive governments have given least importance to health and have withdrawn their hands off responsibility to provide health care to the citizens. With the change in economic policies of neo liberalism under globalization healthcare has been left at the mercy of private sector. People have to shelve money for expenses on health from their pocket which is pushing 6.3 crore population below poverty line every year.  Public spending on health is as low as 1.1% of the GDP as against the required minimum of 5%. Expenditure on preventive care is only 9.6%. There is no linkage of healthcare model to the nutritional needs, job security, housing, clean drinking water supply and sanitation.

Dr Arun Mitra – Senior Vice President of IDPD and member core committee of the ADEH regretted that even after so many years there is no rational drug policy. More than 67% expenses on health is on drugs. There is huge profit margin on drugs. Even the government’s own committee on trade margins had pointed out this fact in 2015 and recommended capping of the trade margin to a maximum of 35%. But no action has been taken by the government. As a result the patients are being fleeced. He pointed out that public sector pharmaceutical units have been producing cheap bulk drugs for not only India but also for several other countries. He demanded that there should be a rational drug policy based on one drug one price, trade margin at not more that 35%, price of the medicines should be fixed based on the cost involved on its production and strengthening of public sector pharmaceutical units.   He said that there is need to make healthcare a public agenda.

Dr Sham Sunder Deepti – Prof. Community Medicine Govt. Medical College Amritsar said India has to adopt a people centric healthcare model. But unfortunately we have adopted the US model of purchasing the healthcare.  The much propagated Ayshman Bharat is limited to less than half population, that too only for inpatient care. The whole exercise is also to benefit the insurance companies. There is project based piecemeal approach in healthcare. This has to be changed with comprehensive model of healthcare.

Dr Karamjeet Singh Gill asked the people to be conscious of early detection of disease. They should not take medicines on their own. There is need for proper healthy diet and exercise.

Shri Ramesh Yadav -  Secretary Folklore society & coordinator of the seminar thanked the speakers for their presentations.

The seminar decided to strive to make health as a public agenda.