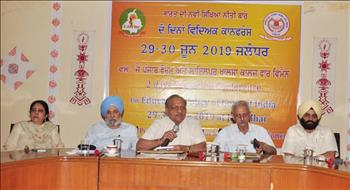 Dr Tejbir Singh said that medical education system is based on the healthcare system being promoted. The Bhore committee, way back in 1943, had come out with proposals of Healthcare for all citizens to be provided by the state irrespective of her/his socioeconomic status. This seemed to be the direction in early post-independence period. But in 1980s the whole scenario shifted. Even the WHO changed its stance under the pressure from the multinational corporations. The whole concept of medical education to produce social physicians changed to produce doctors to serve the corporate hospitals. Thus the concept of General Physicians got diluted. As a result we find mushrooming of private medical colleges which charge exorbitant tuition fees leading to reservation of seats in the medical colleges for the affluent sections. There is need to produce doctors who take care for the rural population. The whole concept of healthcare has to change to make the medical education responsive to the needs of society.

Dr Arun Mitra said that there is need for a public movement to make healthcare education pro-people. Unfortunately there is not big movement in the country on health issues. He cited that since 1990 till 2017 there have been opened 238 medical colleges in the country in Private Sector and only 115 in the state sector. Now the government wants to introduce exit exam which will be an additional burden on the students. The NEET too has several flaws in diverse country of ours where there are many state specific situations in the field of education. The government’s proposal to govern tuition fees only in 40% seats and leave the rest 60% to the private managements’ decision will be detrimental he cautioned.

Dr Surinder Sidhu cited the example of handing over the Punjab Institute of Medical Sciences (PIMS) Jalandhar which was built by the government to the Fortis group in the name of PPP. This amounts to handing over the state property to the corporates at throw away prices.

Principal Tarsem Bahiya said that citizen’s committees need to be formed on such issues of public importance.  Dr Navjot Kaur , Principal of the host college said that such interactions should be taken down to the people. Others who addressed include  Shri Satnam Channa, Shri Ramesh Nayyr, Dr N P Siingh and several educationists. The talks were followed by a healthy debate on the issue.

The event was co-organized by Jai Punjab Forum and Lyallpur Khalsa College for Women Jalandhar.