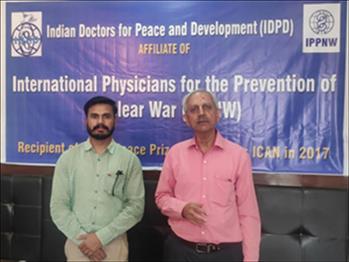 HEALTH SHOULD NOT BE A VICTIM OF POLITICAL MACHINATIONS

AN EYE WITNESS ACCOUNT OF HEALTH SCENARIO IN KASHMIR VALLEY

Healthcare is a fundamental right of every citizen. Under no circumstances it should become victim particularly under politically made situation. There have been several reports about health care problems in the Kashmir valley after imposition of curbs on 5th August 2019. Dr Arun Mitra, Co-President International Physicians for the Prevention of Nuclear war (IPPNW) a Nobel Peace Prize winning organization in 1985 and then in 2017 as a partner in International Campaign to Abolish Nuclear Weapons (ICAN) and Senior Vice President Indian Doctors for Peace and Development (IDPD) visited the Kashmir valley in this regard to assess the health care situation there after imposition of curbs. Some doctors belonging to Alliance of Doctors for Ethical Healthcare (ADEH) had requested the union Home Minister to facilitate their visit to the valley to assess healthcare situation. But it is unfortunate the minister did not care to reply. The issue was highlighted after Dr. Omar, a Urologist was detained when he requested for removal of curbs on movement of doctors and patients and ensure supply of medical equipment needed for Dialysis and other problems.

Psychological problems are plenty and are going to take toll of the society in times to come. The people are living under extreme stress with a defeatist feeling and being cheated. They fear talking about their feelings to anyone. There is total lack of trust.  There is a general feeling among the population that over 11000 thousand people have been detained and sent to other states. They are being put in jails in Agra, Delhi and other places and that they are being maltreated in extremely inhuman conditions. Such information increases the stress and fills the people with anger and helplessness. Children are not attending schools for over 70 days. They are full of stress and anger. Small children ask their parents why they are not going to school. They miss their friends and class and  fear losing their career. Colleges too are closed. Young boys are very angry and stressed up. The parents are always afraid that if the children go to school what is the guarantee that they will come back safe.  Since they do not have any communication system they feel it dangerous to be disconnected from children.

There is difficulty in connectivity with the doctor. In the event of emergency the patients are not able to call their doctor because of absence of telecommunication services. Only land lines are working that too erratically. A miniscule population has land line telephones. Even communication amongst the doctors is not there. This affects cross consultation among doctors.  In the absence of public transport system people find it very hard to take the patient to doctor particularly from far flung areas.

There is problem of supply of drugs particularly the anti-cancer and anti-diabetic drugs. In the absence of internet, placing order for supply of drugs and medical equipment is very difficult including billing.

Since no business activity is going on people’s economic situation is deteriorating. Daily wage earners and small business, the transporters and the Shikara people are affected very hard. As a result of apprehension of some drastic action by the government people had stocked staple food like rice. This would finish soon. That would be a serious situation. People from low socio economic strata were quite vocal about that their first necessity is food to live which is getting difficult every day. It is obvious that when there is no proper nutrition health is going to suffer.

Any increase in tension between India and Pakistan is going to be dangerous since the two countries are nuclear possessing powers. Any escalation in tension between the two could pose threat of use of nuclear weapons which would be disastrous for the whole world and would put over 2 billion people at risk of starvation and death. Therefore no such steps should be taken from either side which could worsen the situation. For this dialogue between the two countries is essential.

It is important to make situation conducive for a detailed health study by independent groups.