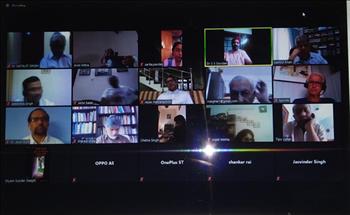 Notes from the Webinar

A Webinar of the South Asian affiliates of IPPNW was held on 2nd  August 2020 on Combating Triple Threat - COVID 19,  Climate Change and Arms Race. Webinar was attended by representatives of IPPNW affiliates from Bangladesh, Nepal, Pakistan, Sri Lanka and India. It was chaired by Dr Kamrul H Khan Regional Vice President of IPPNW and was moderated by Dr Arun Mitra Co-President IPPNW. Bjorn Hilt, Chair of the IPPNW Board made his pleasant presence in the webinar. Maj. Gen. (Retd.) Vinod Saighal honoured the event with his participation.

Various speakers in the webinar gave their view point on the situation of COVID in their respective countries. There was a general consensus that the governments were late in responding to the crisis. Therefore barring Sri Lanka all the countries have high number of cases. Fortunately the mortality rate in all the South Asian countries is not too high for the reasons unknown till date. Whereas initially the disease spread more among the affluent section of the society but gradually the lower income group too have been affected. Poor public health system in the countries of South Asia became a cause for spread of the disease to this extent. Delayed response to the crisis led to inadequacy in the preparation to face the disease in this specific situation when we do not have sufficient knowledge about the spread and effects of virus. Due to restricted activities as a result of lockdown the economic crisis that ensued affected the marginalized sections of the society very gravely. This has led to serious issues of hunger and nutrition deficiency among the low income groups. This is bound to have a long lasting impact on the health of the children in particular. Unfortunately there was poor support by the governments in most of the places. Mental health issues which became grave in such situation have been broadly ignored by the governments. The meeting decried violation of human rights by the governments in different places who tackled the pandemic like a law and order problem. The situation got chaotic as the politicians took over and public health principles were ignored. Professionals should be allowed to handle the medical issues and ensure care and safety of corona warriors.  The meeting opined that public health issues are common in the South Asian countries. There is need for respective governments to join hands together and with civil society.

There was satisfaction at that there is global effort being made to produce the vaccine, but there is skepticism that the vaccines will be used for making profits by the companies because of which these will be out of reach of the poor sections. Therefore it was demanded that the vaccine should not be patented in the interest of the global community particularly the poor countries and equality in its distribution and use among the public at large has to be ensured. The meeting was of the concerted opinion that the South Asian countries should have coordinated among themselves and learnt from each-others success stories.  But this did not happen. Still there is time and opportunity is not lost. The forums like SAARC should come forward to make such cooperation happen. Therefore it is imperative that the South Asian countries should shun the arm race and spend money on tackling the COVID, producing vaccine and on health in the long run. It was decided to write a joint letter to all the heads of states demanding the following:

On the eve of 75th anniversary of atomic bombing of Hiroshima and Nagasaki an appeal was made to India and Pakistan as well as to China to shun the nuclear weapons and declare the region as a nuclear free zone and join the Treaty Prohibiting Nuclear Weapons (TPNW) as a step forward to abolition of nuclear weapons.

Bjorn Hilt, Chairman of the IPPNW Board gave an account of the situation of COVID – 19 in  Nordic countries in particular and Europe in general. He informed that next world congress which was due to be held in Mombasa in May this year has been postpone to the fall of 2021.

Meeting held special discussion on the 75th  anniversary of atomic bombing of Hiroshima and Nagasaki and expected from the global community to learn from that event and desist from arms race and join the TPNW. It was decided to observe in some form or the other the events to pay homage to the victims of atomic bombing in Japan in 1945. It was also decided to hold a South Asian seminar on 26th September 2020, the UN International Day for the Total Elimination of Nuclear Weapons.

Various affiliates expressed their earnest desire to participate in the world congress in 2021 but expressed inability to commit the numbers at this moment because of uncertainty in the COVID situation. They informed Bjorn that as the situation improves each affiliate will communicate about it.

The meeting felt that we should start working on a blueprint for a post- covid 19 world order as suggested by Maj. Gen. (Retd) Vinod Saighal.

It was also decided to make such webinars or web meetings a regular feature. Dr Kamrul concluded the meeting with special thanks to Bjorn who attended the webinar especially on behalf for IPPNW Board.