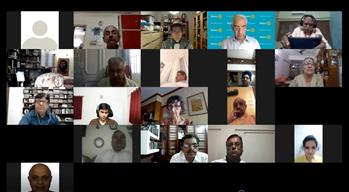 Report of the Webinar on  Forward to Global Nuclear Disarmament

A Webinar on "Forward to Global Nuclear Disarmament" was organized on 8th August 2021 by Indian Doctors for Peace and Development (IDPD), Coalition for Nuclear Disarmament and Peace (CNDP), All India Peace and Solidarity Organisation (AIPSO) and National Alliance of Anti Nuclear Movements (NAAM) to pay homage to the victims of the atomic bombings at Hiroshima and Nagasaki. The international level webinar was run live on Facebook by Dr. Arun Mitra – Co President International Physicians for the Prevention of Nuclear War (IPPNW) & Senior Vice President IDPD introduced the theme of the seminar.

Giving his presentation on Dangers of Nuclear Arms Race – Global and South Asian Scenario, Dr. Suvrat Raju a Theoretical Physicist said that the nuclear arms race goes unabated. Behind this is the hegemonistic  tendency by the nuclear powers. The danger of nuclear exchange between India and Pakistan is real and grave as both the countries have threatened each other with the use of nuclear weapons.  He stressed that one should recognise the need to connect the struggle for Nuclear disarmament to struggle against hegemonic and militarist ambitions held by the US and others.

Dr. Tilman Ruff – Co President IPPNW speaking on Treaty Prohibiting Nuclear Weapons – Where are we now said that the TPNW is a great achievement on the part of peace movement because despite tremendous pressure by the five major nuclear powers the world community voted for the treaty at  the UN. The treaty is already in force. The task ahead now is to convince the nuclear weapons possessing countries to shun these weapons by joining the treaty. The meeting of the state parties scheduled in January 2022 is an important event.

S P Uday Kumar – Coordinator NAAM speaking on Pursuit of Nuclear Energy in India and its implications said that despite huge expenditure and putting the lives of the people at risk by the nuclear energy its contribution in the electricity production is only 2%. Those opposing the nuclear energy are labelled as anti nationals and charged under sedition. This is totally non transparent; so much so that issue can not be raised in the Parliament.

Harchand Bath- Deputy General Secretary AIPSO said that there is a need for building broad movement for nuclear disarmament. People’s initiatives are the key to strengthen this narrative which is at lowest ebb at present.  We have to spread the message of this webinar and build movement.

Achin Vanaik hailed Bangladesh government for its ratifying the treaty. Bangladesh can be nodal point in initiating dialogue for a nuclear free South Asia. He further pointed out the need to put pressure on the US to ratify the CTBT following which China would do so and India and Pakistan would be under great international pressure to themselves join and ratify the CTBT. This outcome would be a small but necessary step forward to greater nuclear sanity.

Dr Kamrul H Khan – Deputy Speaker International Council IPPNW and President PSR Bangladesh assured that he will take up the matter at higher level in his country once there is some stabilisation of the COVID.

Dr S S Soodan – President IDPD who chaired the session cautioned that a nuclear fall out is much worse than any pandemic. We have no vaccination against nuclear weapons.

Amarjeet Kaur – General Secretary AITUC talked of the impact of COVID on the working people particularly the women. She warned that spending on the arms, specially the nuclear arms is costing the welfare of working men and women.

Ulfat Pardesi – International Students Representative IPPNW said that students and youth with their energy and knowledge have to be empowered to work for peace and health.

Dr Shakeel Ur Rahman – General Secretary IDPD stressed on the need to follow up with such events to build the narrative for nuclear disarmament and peace.

Ann Frisch – Rotarian Action Group said that the Rotarians will make a special programme of action on this.

Dr N S Bawa – Senior Vice President IDPD said that the younger generation should be encouraged to come forward to carry the banner for peace.

Others who participated in the deliberations include Admiral Ramdas, Lalita Ramdas, Dr Pawan Arya, Urvarshi Sarkar.

Large number of people participated in the event at Zoom and Facebook.